Elsa Uhinck Pardee was born on a farm south of Cleveland, Ohio, on November 7th, 1884. After a one-room school elementary education, she attended high school and college, and taught in the Cleveland elementary schools. 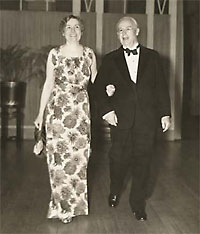 Elsa married James T. Pardee in 1914, a college classmate of Herbert H. Dow. Mr. Pardee was a founder and board member of The Dow Chemical Company. Elsa died in 1944 at the age of 59 from breast cancer. Before her death, she directed that $1 million in Dow stock be devoted to the “control and cure of cancer.”

The decision to not donate a lump sum of $1 million to a single organization boded well for the Elsa U. Pardee Foundation, formed in memory of Elsa by the family she left behind. The family, which was later joined by many dedicated non-family members, turned $1 million in potential giving to $147 million in actual giving by 2019.

The Foundation believes that Elsa would be pleased and proud. This website and all of the foundation’s efforts pay tribute to the selfless efforts of current and former Foundation members who have kept Elsa’s wish alive.